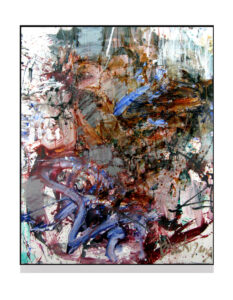 Painting is poetry without words.  Instead of words, the painter writes with colors.  For hardly any other artist this statement is more true than for the painter Peter Backhaus, who emigrated from Germany to Sweden at a young age and has since been inspired by the bright, clear, cool light of the north, which in the cold nights by magical glare  of the northern lights is mysteriously charged.  The abstract painter moves like a pilot in the immeasurable sea of ​​colors.  He explores the shallows and hidden reefs below sea level.  In his pictures you think you can feel the spray that is thrown up behind the fast ships.  When looking at his works I feel reminded of the great Swedish poet Tomas Tranströmer, who published his most beautiful verses under the title ”Ostseen”, meaningful in the plural with the changing times and perspectives in which the poet perceives the Baltic Sea.  One of his earlier poems is simply called “Gleise”, and I would like to quote it to outline the effect that Peter Backhaus’s pictures can have if you look carefully and patiently: 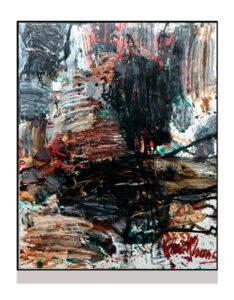 Two o’clock at night: moonlight.
The train has stopped
In the middle of the plain outside.

Far away points of light of a city
shimmering coldly at the edge of the field of vision.
Like when a person has gone so deep into a dream
that he will never remember that he was there
when he returns to his room.

And like when a person has gone so deep into a disease
that everything his days were turned into a few flickering dots
a swarm, cold and small on the edge of the field of vision.

This is how Peter Backhaus’s pictures affect the sensitive observer.  They make you pause, think about yourself, about the beginning and the inevitable end of your own life journey.  As if the train suddenly stopped on the open track for some inexplicable reason.  You cannot ignore your abstractions.  If you look them in the eye, you have to stop and ask yourself the questions that the images in turn ask the sensitive and self-reflective viewer.

Peter Backhaus was born in Ilmenau near Weimar in 1947.  Together with his parents he moved from the GDR to the Federal Republic in 1950.  He grew up in Minden on the Weser by his sister’s side.  His father was a tax officer, his mother took care of the household and the children.  His parents willingly promoted his early artistic ambitions.  He graduated from high school in 1968 in Lübbecke.  In the same year he took the ferry to Sweden to stay there permanently.  At that time, the Swedish welfare state almost had the reputation of a dreamland among the German ”sixty-eight”.  Two of the most important authors in post-war Germany, Nelly Sachs and Peter Weiss, fled to Sweden from the Nazis.  They stayed there after the end of the war and advocated diverse German-Swedish cultural relations.  Integrated into the diverse contacts between the two social democratic countries, Peter Backhaus can quickly gain a foothold in his new home and make friends. 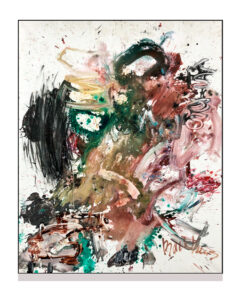 He first studied philosophy, psychology, sociology and art history in Gothenburg and completed his studies with the title of Bacchelor of Philosophy (Fil.Kand).  From 1973 to 1978 he studied art at the Hovedskous Art School in Gothenburg.  He dealt intensively with the old masters, namely with Rembrandt, in whose works he was particularly fascinated by the representation of light and shadow.  But Francis Bacon and Edward Munch were also psychologically charged images, great role models. At the same time, he was musically active and played with great pleasure in a rock band.  He finally took on a professorship at the Gothenburg Art School.  In 2000 he was appointed director of the university, which is highly regarded in Scandinavia.  He eventually became its owner and made an important contribution to the training and promotion of young artists in Sweden until his retirement in 2014.

Since then, the painter has been able to devote himself entirely to his artistic ambitions.  He lives alternately in his homestead deep in the Småland forests, ninety kilometers southeast of Gothenburg, and in Berlin, where he found a second home a few years ago.  He perceives the pendulum movements between backwoods loneliness and big city bustle as beneficial and as an important impulse for his artistic productivity.  In Sweden, Peter Backhaus has been one of the country’s best-known artists since the 1980s.  His works have been exhibited and awarded many times.  In the big Scandinavian exhibition in 2001, “Painting & Painting” in the Kristinehamn Museum with 15 representatives from the Nordic countries, he represented Sweden, alongside Max Book, Ann Edholm and Carl Fredrik Reuterswärd.  The country’s art critics particularly emphasize the Far Eastern influences on his work. 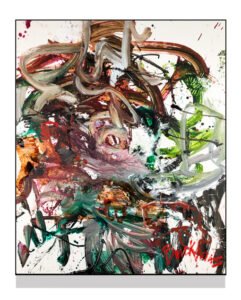 Nothing against the new Berlin but a fertile biotope for creative people and artists from half the world.  But I suspect that Peter Backhaus does not create the abstract pictures as he is painting them in the noisy metropolis, but in the quiet seclusion of his homestead in the interior of southern Sweden.  His artistic development path is divided into several stages.  Art and life are one for him.  At first he painted realistically, but a personal crisis made him doubt his traditional style of painting.  He looked for new ways and ways out, in the personal way of life and in artistic production.  Instead of just reacting to external stimuli, he looked inward.  He began to meditate and acquired the wisdom teachings of Zen Buddhism.  In regular yoga exercises he found himself and abstract painting.  He no longer painted at the easel, but, withdrawn, on the floor like at a yoga ceremony.  “If I have any strategy when painting,” explains Peter Backhaus, “it is that of being completely anchored in the now, in spontaneity, in the awareness that this moment in which I make decisions and make judgments is the only one  Has relevance.  In the here and now I am in the energetic connection with the universe.  As long as I can stay there, anything is possible, all action hits the spot.  My pictures are created in the space between rational thinking and unconscious feeling.  They grow out of spontaneous inspiration, but lead to a long, arduous, energy-sapping work process. ”

Under Sweden’s open and clear sky, Peter Backhaus brings both the spontaneous artistic inspiration and the carefully calculated execution into harmony.  His works should be as ambiguous as the oracle sayings of the Zen Buddhist monks, the Koane.  They describe a paradox that cannot be resolved through logical thinking, but only through the inclusion of the holistic personality in all its dimensions and through the interlocking of head and stomach, mind and instinct, of heaven and earth, of Scandinavian clarity and Far Eastern mysticism  .  His pictures are interior views, they come from a world beyond our everyday consciousness and our sensory perception, outside of space and time.  In this world, perfect calm and boundless chaos exist equally alongside and with one another, just like at the beginning of the universe.  These opposites generate the energies that feed the artist’s creativity and imagination.  They find their most striking expression in his bold and never-before-seen color compositions.  In this way, archetypal landscapes are created that are hidden inside a human soul.  “My painting,” explains Peter Backhaus, “has no sense or purpose, it does not convey any messages.  My brush dances freely across the canvas.  He finds his way and his goal like the arrow of a Buddhist archer in his own way, and that can take time, sometimes in a matter of seconds and sometimes for years. ” 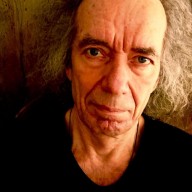